One of the best holiday games of this year!

Link to my channel (opens in new tab)

Thanks man! glad you liked it.

very fun game to play for the festive times! i really enjoyed it!

Thanks, glad you enjoyed it!

Loved the gameplay and the tension while Santa is patrolling. It's a bit difficult at some times which actually made it more stressful and scary. Thanks again!

Thanks, I enjoyed watching the video :)

Ps1 graphics, 80's slasher and Christmas themed? Count me in!
What a fun concept it was, hope to see more something like this.
Good work, the game looks and plays really great. Loved the sneaking mechanic.

I must confess, I did kill Santa so Merry Christmas!

Thanks very much! There'll be more horror games from me in the near future :)

just in time for the holidays. ‘ppreciate you

Thanks man, enjoyed the video!

Hi there, I am a youtuber and I hope to get some support from you guys by leaving a like and subscribe at my channel.

Merry Christmas everyone! I have to say that this is the best horror game to play on Chrstmas Day XDDDDD. This was a great game which nailed the scary and dark atmosphere and the intense mood when being chased by Santa. However, a couple of things seemed a little illogical to me. If  I were to enter the Subway and see a dead body in front of me, I would have just went back from the way I entered the subway immediately as it is obvious that the subway is unsafe to go through. Hence, it was pretty strange that the protagonist actually had the guts to walk around the subway to find a crowbar to open a locked door when there is a murderer dressed up as Santa, going around to kill people. Moreover, it also did not make much sense for me to have a 1 on 1 duel at the end with Santa when I can just take the crowbar I got from the subway and pry open my door or ask my neighbours if I could stay with them for a night instead of walking on the train tracks which is technically quite dangerous and have a face off with Santa.

Overall, the game is amazing with a few illogical decisions made by the protagonist.

Thanks very much! When you enter the subway there is a lock sound that plays, indicating that the door locks behind you, it can be hard to notice though. As for the other decisions, yeah they are a bit illogical but characters in horror games/movies rarely make good decisions and I needed ways of keeping the game going in the direction I wanted. Thanks for the criticisms though, it helps me with future games.

Thanks for reading my comment XD. I wish you good luck working on your upcoming games :).

Hey y'all I hope you guys have a wondeful christmas and if you guys watch enjoy the video!! Make sure to like and subscribe please if  you do enjoy have a great rest of your day and christmas!! :)

Thanks for giving it a go, have a Merry Christmas.

I have one question is it possible to change the mouse sensitivity by any chance?

Not in the current build sorry, I'm going to try and fix the issue in an update.

This was a cool and creepy short game, nice premise with the dark turn of a childhood character .  The graphics were well done for the style you aimed towards, definitely felt I was playing through an 80's horror with old Saint Nick on my back. The sound was well utilized especially when Nick would appear the turn in music was great.

Good work with this short game, keep it up and can't wait to see what you have in store for us next.

Thank you! Glad to hear you liked it. I'm working on fixing the mouse sensitivity in an update.

Fantastic little twist on our beloved Christmas icon :) Something about such a much loved figure trying to axe you to death is just chilling. Had a fun time streaming this tonight.

Keep up the good work, you have a way with horror!

Awesome, that's great to hear. There'll definitely be more horror games from me in the near future :)

Thanks man, glad to hear it :)

That game is really cool! Had a lot of fun playing it!

Thanks very much! have a Merry Christmas too.

This game is really cool!  Had fun giving it a try!

Thanks, loved watching the video :)

Thanks for the video, Merry Christmas to you too :)

Nice ps1 style game. I like how you took a super familiar figure and made him creepy. Nice job. Though, I wish ammos was a different color then weapons when you see them on the mini map.

Anywho, here's my channel for other games I have played. http://www.youtube.com/c/Levont

Thanks!  I'm working on an update and I will be changing the minimap colors for different items :) really enjoyed watching the video.

Really nice game. Not many games give you the feeling of safety and then take it away.

Thanks! I love watching your videos when you play my games (I think this is the 3rd game of mine you've played). Being able to get up on the skip bin and freeze santa wasn't intentional, I'm working on an update and I've fixed that issues, I just haven't finished all the other fixes yet.

Loved it. Nice atmosphere and 80s/ps1 look and feel. Not too easy but not ridiculously hard. Merry Christmas!

Thanks very much! have a Merry Christmas too.

Thanks very much, glad you liked it.

I'm waiting to see more from you! Awesome!

Tried your game and it's brilliant, if i didn't know any better i'd think it was a triple A title

Thanks very much! what a compliment :)

Hey tried out the game, it was amazing! Had fun the whole way through. Keep up the great work!

Thanks very much! glad to hear it :)

Great video man! I had a lot of fun watching it. Sorry about the sensitivity, I'm going to try and fix it in a future update. Thanks for giving it a go.

so good i got so scared at the end

Thanks for making the video, it was fun to watch :)

Watched it on MrKravins channel. Great Job! If you need sound engineering, let me know, I would love to work on a project like this. Happy Holidays

Thank you. I don't need any sound help at the moment but I'll keep you in mind if I do in the future, your music sounds really good! have a Merry Christmas :)

Thanks for giving it a go.

Man it was fun, was streaming it to my mates too. They've downloaded it now

Reply
iwanPlays1 year ago(-1)
Cool beans! I'm actually glad there are not as many invisible walls as there usually would be :D
Reply
Blake McKinnon Productions1 year ago

Thanks for giving it a go! if you don't mind me asking are you playing the game on PC or Mac? the pixelated image effects don't seem to be on and I'm not sure if that an issue with the Mac build or if  its something else.

oh nice, which program do you use to do that? I should have had an option to disable all that stuff in the menu but I didn't have enough time to do so.

BLAKE MCKINNON MADE ME RAGE!!! Lmao fun game though.

Thanks for playing and for anyone wondering I haven't been blocked on twitter yet, haha.

Eventually gunned him down after 45 mins lol. I enjoyed it a lot actually. I hope your game trends!

Thanks for persisting with it for so long! I glad you still enjoyed it though :)

Thanks very much for giving the game a go!

Reply
Neco The Sergal1 year ago

Gave it a go, have my criticisms and successes, hope it's enjoyed

Thanks for giving it ago. I'll definitely take all your criticisms into account when I do an update. I still really enjoyed watching the video. 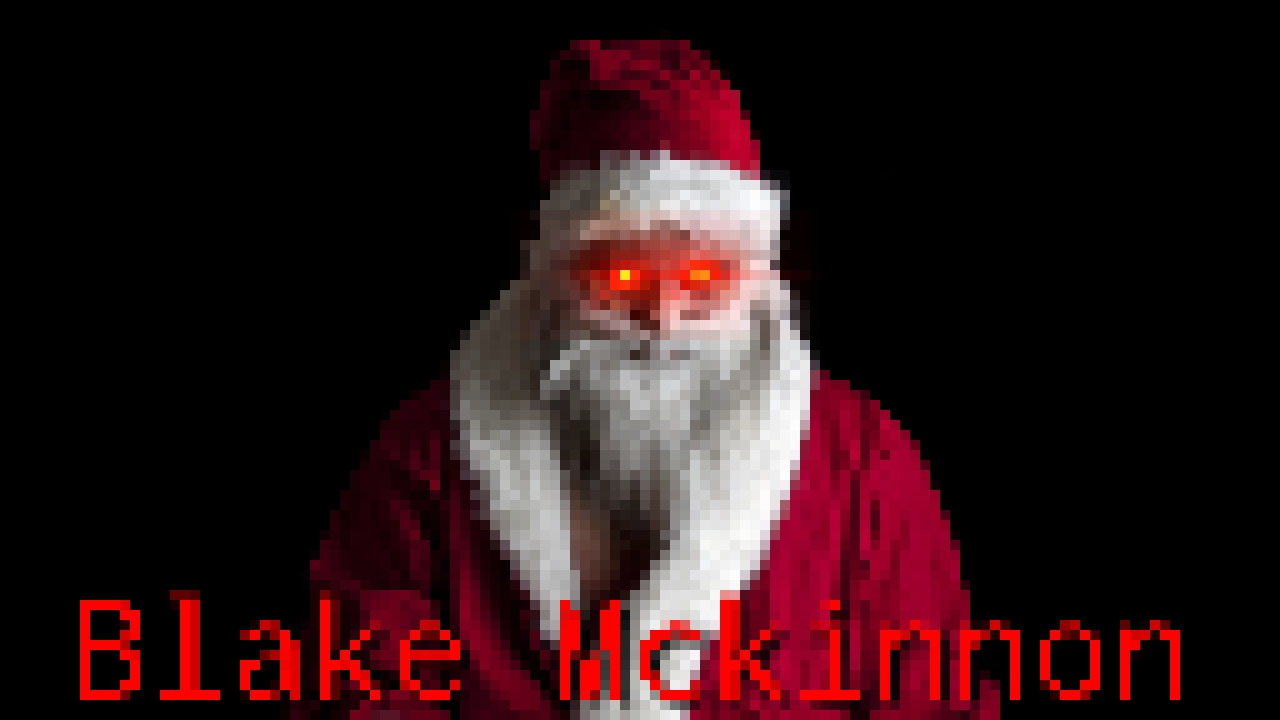 Awesome video man, I'm glad you liked it. It is a bit harder than most of my other games. Cool poster too, thanks very much!

I hope you Enjoyed my video

This game is good and scary! I really enjoyed to play this game. Nice job I like it!

Thanks, I enjoyed watching the video!

Thanks Dev for this great game. I really enjoyed it till end. I wish if it's bit longer. Just improve the mouse speed. Rated 5/5

Thanks, glad you enjoyed it. I don't know what was happening with santa at the end there, I'll look into it. I made the game in about 5 weeks so thats why its shorter. Out of curiosity, was the mouse sensitivity too high or too low? as I've heard both from people.

Amazing game dev had so much fun playing it :) i hope you enjoy my gameplay

Thanks very much, loved the video!

I am Excited! I told you that I am gonna make face cam when I play this but I will release my voice only, I dont wanna make face cam, because I dont like to show my face in this time, but Thanks for the game I didn't play just jet, there's a video coming on my channel, best blake!

Glad to hear it. No problem about face cam, do what you want man :) I'll definitely watch it once you upload it.

Man I need to get recording this for my channel. Could be my first video on the channel. This looks awesome

That'd be awesome! post it here once it's uploaded and I'll watch it!

Loved the game, gave me the best Puppet Combo vibes in a while. Had some funny moments with Santa in my gameplay, the ambience and atmosphere was pretty good overall nice game, hope to see you on the trending page and Happy Extremely Early Merry Christmas!

Thanks very much! I'm glad you liked it. Have a Merry Christmas too!

Hey I'm trying to run the game to make a Let's Play, and it keeps crashing.  The small loading screen comes up for about 2 seconds, then exits.  I'm getting a UnityLoader.dll crash in the event log.  Running Windows 10 home... any ideas?

This is honestly everything I could have asked for in a game where you're being chased by a murderous Santa! I also never thought I'd jump at the sight of Santa quite this much...

Thanks so much! I really enjoyed watching the video.

Thanks very much, Merry Christmas to you too :)

can he be killed? not by the gun i find atleast, and cant run from him either

not during the second level, but later on yes, you can escape him though.

I killed him with the gun. you just have to gather enough bullets before he pops up.

Thanks for playing the game and making the video!